(1) The bangle sellers are going to the temple fair to sell bangles and earn some money. Though they are poor, yet they are happy and contented.

(ii) The bangles sold by the bangle sellers have been compared to 'rainbow-coloured circles of light', as they are shining, round and multi-coloured. It is a metaphor.

(iii) These bangles are for girls and women of all ages. The word 'happy' is repeated by the poet in order to emphasise the fact that the bangles are meant for happy virgins and married women, and not for unhappy widows who are not allowed to wear bangles according to old Indian customs.

(iv) Virgin maidens are full of longings and dreams. They prefer to wear bangles of silver and blue colours. They also like to wear pink and green coloured bangles.

(v) The rhyme scheme used in the poem is aabbcc.

(ii) The mountain mist is used to convey the idea as to what kind of silver and blue colour of the bangles is. It suggests the mysterious, undefined longings in the hearts of the virgins.

(iii) The pink coloured bangles are described in a beautiful visual from nature. These bangles look like the pink buds that float on the calm surface of a forest stream.

(iv) Some of the bangles carried by the bangle sellers are of green colour. They look as shining and fresh as new-born tender leaves.

(1) Virgin maidens prefer to wear bangles of silver and blue, pink and green colours. All these colours match their tender, raw feelings and longings.

(ii) The bride has preference for bangles which are as yellow as the sunlit corn field. The corn field is a symbol of fertility of Mother Earth. The bride who is getting married is ready to be a mother, too.

(iii) The red colour of bangles liked by the married girl reminds the poet of the red flame of fire, a symbol of passion.

(iv) The literary device used in the two lines is simile.

(v) These contradictory expressions are used to convey the contradictory feelings of joy and sorrow in the bride's mind. She is happy as she is getting married but at the same time she is sad and sorrowful at the thought of separation from her parents. 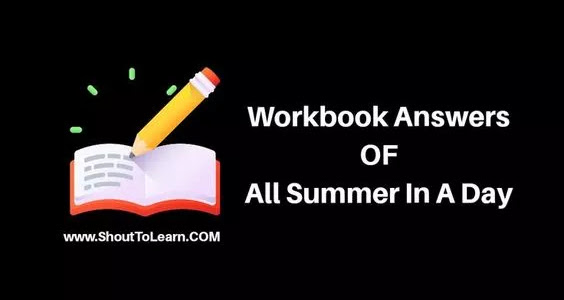 Workbook Answers of All Summer in a Day

All Summer in a Day Extract I (i) What are the scientists expected to know? Who are qu…